This week, my life in latex.

I drove over to see Julie Carpenter on Tuesday as I was off to a balloon workshop on the Wednesday in Enfield. So spent the afternoon twisting and taking Julie some balloon supplies over. Had a very nice home made lasagne that Julie made and it was nice to see Mark Shortland for the afternoon as well. We then went off to the Watford magic club to see Martin Cox talking about writing comedy patter. I have seen Martin a couple of times running a lecture but this was the first time seeing the talk on comedy, it was interesting and an enjoyable evening catching up with a few who we only usually see now and again at conventions and possibly the odd chat on facebook.

It was then off to the Colin Stewart workshop on line art and quick link numbers and letters. It was interesting seeing how others approach running a workshop and interacting with attendee’s. It was also nice to meet up with Lucy Hennessy who I have not seen for we think a couple of years. A nice day, I have posted some pictures from the event on Balloon chat, Lineart Pictures.
There are still a few pictures to add over the coming days.

It was then back home and start to get the balloon warehouse ready for the new storage system we had arriving on Friday. Well I was only an hour into fitting the new insulation when we had a delivery, the storage boxes that were booked in for delivery on Friday turned up Thursday morning. They were here and a day early, still better that than them not turning up. We only had 70 of the 400 boxes delivered as we were concerned with them all fitting in the house. The 70 that arrived were all the bigger boxes, the next delivery will be more volume wise but hopefully manageable. I have to order 11 more larger boxes as well as my calculations seemed to have gone a little astray. The next order we will confirm on Monday for a delivery date before the weekend. It has been hard graft moving everything about and having a complete change about with the layout. If you wanted to check on the progress of the warehouse then I have been adding pictures to a thread over on Balloon chat. Warehouse pictures.

It’s BalloonTube Sunday this week with the next tutorial instalment all ready to be published, the last tutorial the dolphin seemed to be a big success with nearly double the views in a week and some very nice comments left to read, so thank you for those, much appreciated. This week we have gone for the penguin which is my version of a design that I had been making for years by Thelma Levett. About three months ago I had a little play with the design and changed things about, hope you like the new look. BalloonTube Penguin.

Off to find a random balloon picture for this week,
not sure there are too many to choose from as we have not done too much twisting this week.
I went with the sausage dog design that I started to work on possibly a year ago now as
it came up on my facebook memory throwback this morning.
These were a carry on quick and easier design for the real world.
There are more pictures to view here, Sausage Dog. 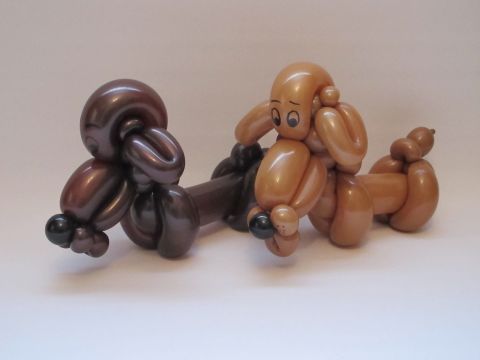