So this week, the AA came to inspect the car I bought 8/9 weeks ago and seemed to be pretty un impressed with it. So fingers crossed that what they told us at the inspection goes into the report. The garage wanted the car back on Friday 22nd Dec which gave us only 8 days to find a new car, we have found a car now and I picked it up on Saturday from a private seller. The old car I’m driving back to St Austell on Tuesday 2nd Jan, two reasons, one is that a lot of mainline stations are closed between Xmas and New Year for engineering and the journey home would take 7/8 hours rather than the original 4 and there would be three or four train changes plus the firm could not do a bank transfer for the cost of the car till the new year.

The new car I have is still a fiat doblo and the person I bought it from was a musician and worked with bands all his life so we had a good talking point and he was a bit of a character and had three classic cars. He was 86 and had the car for over 10 years. I’m sure this one will be better than the last one, could it be any worse?

Ballooning, this week I worked with Lord G up London on a gig, trouble was he was working one floor of the bank and I another so we never got to chat and interact, maybe another time. BalloonTube next year is going to only once a month and on the first Sunday of the month. As next Sunday is 31st I will post then for Jan and then go to the first Sunday of the month. We are nearly up to 1000 subscribers, I think three short at the moment.

All the pictures are up on the forum for the Sam Cremeens workshops and we are over half way through with the pictures from the Hamburg Jam.

Till next week, merry Christmas XXxx
The random picture of the week? Not sure, off to look.
I went with a little Christmas theme and Rudolph.
There are step by step instructions over on balloon chat
if anyone would like to have a go at making him, Rudolph. 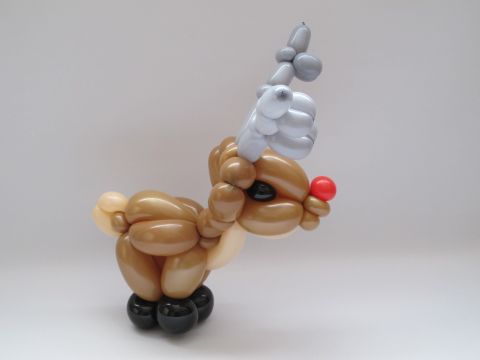