The blog is a little late today as I have been filming for BalloonTube. We have filmed 7 designs today, Tank, Rabbit, Angel Wand, Owl, Racing Car, Crown and a Rocket. The filming went OK, the car was on the third attempt as we had a couple of pops. The Owl the second as I forgot to inflate the balloon for the eyes so started again and all the others were one takes. So that was not too bad,.

Last week I went to the London Jam, the pictures are up on the forum here, London Jam.

I had a mid-week magic show on Thursday, I can’t remember the last time I had an after school magic show. They usually are quite difficult to control as the children have hyped themselves up all day and then meet up a little while later. Well it was a little loud when I arrived and the mum did comment that they were not doing as asked, so off I go, the first boy to step out of line I’m fairly stern with so that they can see there is a line to behave behind. And after that it was a fab party, I really enjoyed it and had fun with the couple of adults that stayed during the party as well.

I’m off to the Essex face painting jam that takes place in Hornchurch on Tuesday 24th Oct. I will be taking the shop with me and running a couple of small workshops during the day. More details if you would like to join us are on the facebook page, Essex Jam.

BalloonTube this week is the Fox that I made way back in Jan 2016, I did not realise it was that long ago. Some sad news, I have decided to go from every other week with a tutorial on BalloonTube to only once a month as from the New Year. It will give me a little more time to get things ready and to not be under so much pressure in coming up with new designs. BalloonTube Fox.

Well that’s it from me for this week, off to find the random balloon picture of the week.
I went with the rocket that I filmed this morning, the one on the left is made
with a 321 balloon and the other two are made form a 350 balloon. 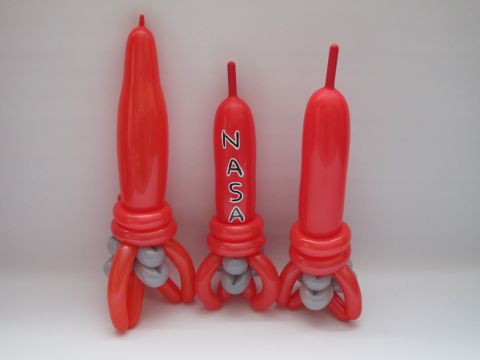