We are just back from the Hamburg Jam that was a lot of fun, needing to catch up on some sleep and all the emails and calls etc. It was a fun time with Amanda, Caroline and Susie, we managed to not get lost going from the venue back to the airport on a couple of German trains. One did also split in two at a certain station so you did have to check you were on the right section…………..just ask Tony what happens when you are on the other section, oops.

It was nice to catch up with some who I had not seen for a few years and also to make a few new friends. It was difficult at times due to the language barrier, quite a few people started to talk with me about things but as my German is nil it soon came to a stop. I hope people did not think I was being rude, well fingers crossed they understood.

Thanks to Andreas & Sandra for putting the event on, I’m not sure everyone realises all that goes into running the event, especially with accommodation and full board to work out as well.

There was a nice mixture of twisting and décor with 3 or 4 workshops all going on at the same time. One on décor, a basic twisting class and two more advanced twisting classes so hopefully something for everyone and then there is always the 24 hour jam room. It was nice to go in early in the morning before breakfast to twist for a little while, one of the more quieter times.

I have started to post some of the 1087 pictures that I took but it will take a few weeks if not longer to post them all up on balloon chat. Hamburg Jam.

Off to find the random balloon picture of the week.
I went with the camouflage tank that I made in Hamburg.
The top section was a little different to the way I usually make it and I
used Antonio’s pinch line technique for the tracks that worked pretty well. 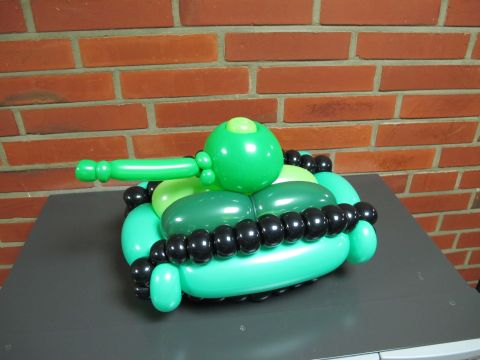