I was so busy last Sunday doing nothing that I forgot to write the blog, I also forgot to up load my BalloonTube tutorial which goes up on the first Sunday of every month. Well it used to till last week when I completely forgot about it, ooops!

I have posted the tutorial today, one week late but still on a Sunday, I went with the Pug design I came up with a little while back now. On the tutorial I did not add white edding to the black for the eyes which might help? This is tutorial number 73, hope its of use to a few.
BalloonTube Pug Tutorial.

We have been joining in with the balloon challenges that Rob Driscoll is organising over on The Balloon Artistes Guild Facebook page. the challenges are being set every other day and you can just join in with any that you fancy. Facebook Balloon Challenge.

Rob also kindly did a day of Facebook Live to promote the Balloon Artistes Guild balloon club that we run, the tutorials are being kept up for a couple of weeks if you would like to view them, Rob Facebook Live.

I recorded a little section as well with the Owl design I came up with a few months back. It has not been shown or explained anywhere as yet so was an exclusive. If anyone would like to view that then again it will be staying up for a couple of weeks. Owl Design.

Off to look for the random balloon picture of the week, there are a few to choose from.
I went with my joke one from the challenge, the theme for the day was Unicorns.
So this was my Uni-Corn, It made me smile and I came up with
a nice way to make Corn pretty quickly. 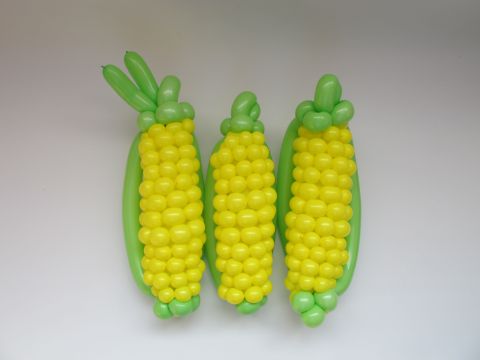